In Eve’s new series “Aux Portes du Passé” Eve is fascinated with the waterways in France and explores that in her designs.

Many towns in France were formed as a result of their proximity to rivers and the ocean. Eve reflects on this with her opals in several of her pieces. In her “Palais Garnier” pin she gives a nod to the beautiful Opera House. This pin features a luminous doublet opal and 18 karat gold reflecting the opulence of the ironwork from this famous building.

The Palais Garnier or Opéra Garnier is a 1,979-seat opera house at the Place de l’Opéra in the 9th arrondissement of Paris, France. It was built for the Paris Opera from 1861 to 1875 at the behest of Emperor Napoleon III. Initially referred to as “le nouvel Opéra de Paris” (the new Paris Opera), it soon became known as the Palais Garnier, “in acknowledgment of its extraordinary opulence”

Eve continues this theme and looks to the sky in these other-worldly “La porte de nuages” earrings featuring boulder opals with 14,18 and 22 karat gold. 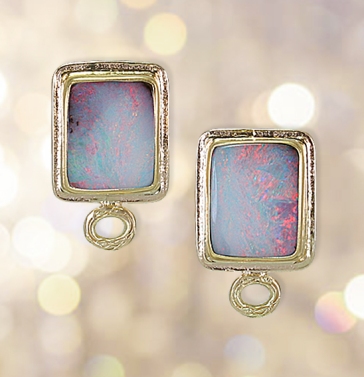 One of the many things that Eve noticed is that many of the churches seemed empty of worshippers and full of tourists. These structures have been maintained by the state largely for tourists. Many of the spaces have been renovated and sometimes don’t evoke their original feeling. One of the churches where she did see worshippers on their pilgrimages was the Sacré Coeur in Paris. The Sacre Coeur Basilica was designed by Paul Abadie in Romanesque-Byzantine style. Construction began in 1875 and was finished in 1914. It was consecrated after the end of World War I in 1919.

She recognized this devotion in her “Sacré Coeur” earrings with grossular garnet in a 14 karat rose gold design.

“On this visit, I also marveled at how, in France, the State has taken over and preserved the churches- each is now a locus of public entertainment and concerts, while the faithful have been dwindling. Yes, the soaring cathedrals look fantastic.”

In her beautiful “Place de Sainte Eglise” pin with purple sapphire, green tourmaline and pink tourmaline Eve twists and turns the cross-like figure to make a statement about the change in these holy places. 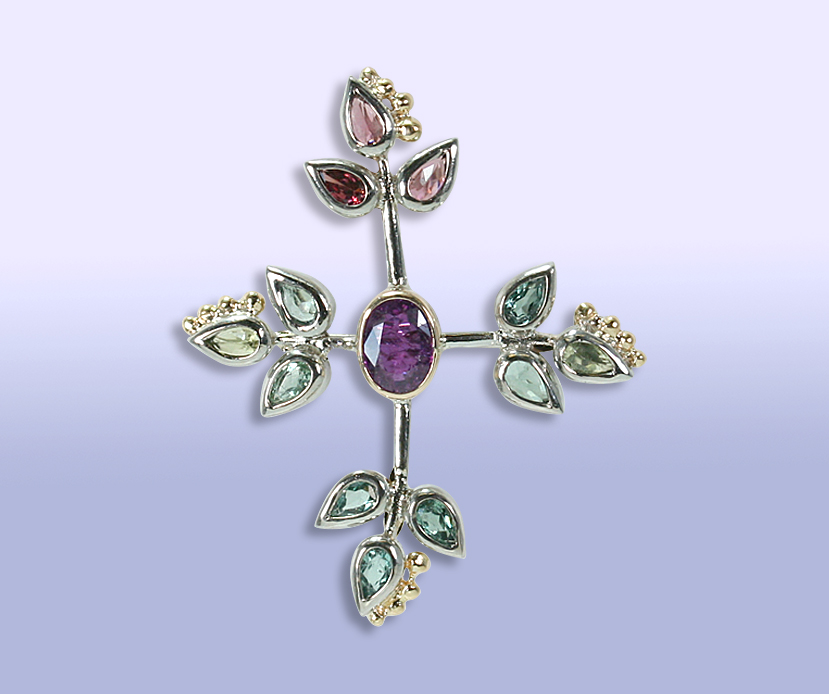 Eve’s love for her homeland comes through in this spectacular series. We hope you can join us for the opening of “Aux Portes du Passé” on November 16th from 1 to 7 at the Gallery!