Q: How did your trip to Pompeii make you feel?

A: There’s no other place in the world where 2,000 years doesn’t seem to matter. Through the tragic occurrence of a volcanic eruption and the miraculous discovery of a buried city 1,700 years later, we’re able to see and feel what life there was like. When you’re there you can actually see it very easily…suddenly, something happens, and second sight occurs. A dogs’ dish on the floor, a lost sandal, humble things of everyday…things you immediately recognize, that become very real. Pompeii does that for you.

Q: How did these feelings motivate you to create this series?

A: If you want to evoke it…how do we do that?

One way is to appropriate: to reproduce what people had or did in those days. But obviously, there’s no point doing it exactly alike. It’s going to be tinged with ‘today’ in some way. So, it has to be filtered through my impression, my sensibility…but my intent is to give you some jewelry that you would have worn if you had been Claudia or Flavia or someone in Pompeii at the time.

But the other thing that occurs to you there is that you become really gripped by what time has done, and it’s especially poignant there because things are so well preserved…and yet, with two thousand years and the elements…they’ve had some effects. So what you see, the sum total, is very, very strongly 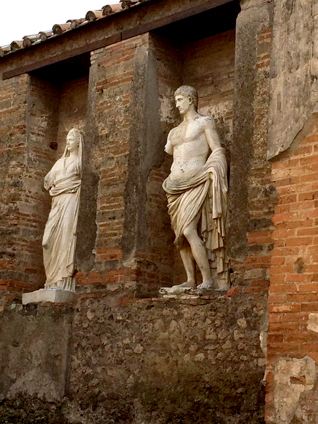 emotional. You see the first part: a tempus fugit.

The carpe diem, that’s the other conclusion. You feel happy for those people, that they had such wonderful lives. Pompeii was actually a resort; that’s where rich Romans went. They were relaxed.

Q: What do these two themes mean to ‘Pompeii?’

A: So these two Latin sayings are actually the two sides of the collection. They will look different. One is the carpe diem, the part about “seizing the day,” about “living the life.” And life in Pompeii was a very rich life. People were there to relax, to enjoy life, to show off. They built magnificent houses; the frescoes were amazing, and the mosaics were incredible. So we have a picture of life lived to the utmost– and that’s the carpe diem.

But over 2,000 years have passed, and what time has created is different. It’s not so much the fact that many things are ruined…it’s the beauty in how time has affected things, how time has ruined them. It’s how we are affected by seeing this decay. I think it’s a very powerful thing: it’s the flag of time, the tempus fugit.

Q: What can we expect to see stylistically in this series? Any stones of note?

A: There will be some things that perhaps Pompeii would not have seen. Maybe black diamonds were very rare, or occasional there, more than they are now. But in the second part, one of the pieces of shorthand that I’ve used (as the Romans did) are intaglios and carved figures. For these, the designs will often be negatives, not positives. They will be shown in reverse, because we are going backwards through time from the present. They will be seen through other gems, because that is what one sees: you see things through a glass. There will be a number of pieces like this: where antiquity is present, but not directly. You’ll see it a remove or two…one remove is by seeing only the reverse of the scenes, the other one is in seeing them through a barrier.

There will be the gems of antiquity, the emeralds and the rubies. There will be moonstones, which I chose because they are like a crystal ball…you can see into them, but you’re not sure what you see, and I like them for that. There will be some gems in the tempus fugit half which we did not discover until modern times…opals, tourmalines…they were later gems. We’ll use those to mark the time that has elapsed since then. I like opals because the colors are evanescent: they change with your point of view.

Q: How does this series fit into your work as a whole?

A: Something I’ve dealt with in a lot of my series is the fact of our mortality and how we choose to see that time is fleeting: that the hourglass is not going to reverse itself.

I’m very conscious of being just a speck on the march of the ants through history, and I think there’s a great beauty in fulfilling that role, in being part of destiny, in actually watching time flow with our own eyes. That is something I like to celebrate rather than fear. And so, maybe half of the jewels you will see in the serie s are about tempus fugit. They are meant to be somewhat nostalgic, to evoke perhaps faded colors, but colors of great poetry, of great sensitivity. And that is the difficulty: how do you reconcile the two?…You can only do it by keeping them separate.

So, the series will actually have two components, and I would very much like for people to understand that the first ones, the ones that recreate ancient life, will be perhaps easier to comprehend. But please: stay and watch the others, and I think after a time, that their beauty will seize you as well.